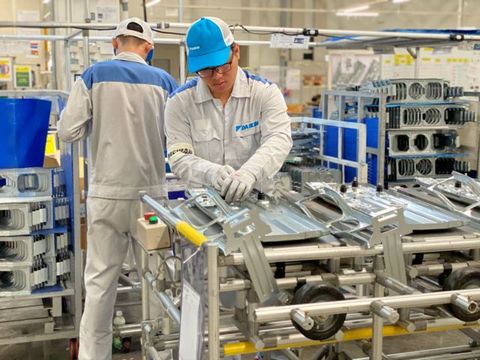 Workers at the Daikin factory in Hung Yen Province. Japanese investment in Viet Nam has strongly developed in both quality and quantity. — VNS Photo Thu Ngan

Japanese investment in Viet Nam has strongly developed in both quality and quantity as investors are applying the most advanced technologies in production, experts have said.

The investment trend will be essential as the 4.0 industrial era continues to develop well in Viet Nam, with both domestic and foreign companies increasingly using advanced technologies including Big Data, the cloud, and AI (Artificial Intelligence) in their production.

Because of US-China trade tensions, many Japanese companies want to set up manufacturing in Viet Nam, experts have said. Moreover, the companies also see great potential in the Vietnamese market with its young population, cheap labour, and preferential policies from the Government.

Speaking about Japanese investment in 2019, Hirai Shinji, chief representative of JETRO HCM City (Japan External Trade Organisation), said: “There is now a greater diversity of investments, but manufacturing is still by far the largest in terms of money invested.”

Japan’s Daikin Vietnam factory, for example, illustrates the trend in which the Japanese are investing more in highly advanced technology in Viet Nam.

Daikin, which has been in operation since May 2018, is expected to contribute to energy conservation and public health, such as energy-saving air conditioners and air purification, as more people in Viet Nam are buying air cleaners, according to Shinji.

Compared to factories of Daikin Global, the factory in Viet Nam has the most advanced technologies as it is the first factory to use AGV, an automatic machine that delivers supply components to production lines. In other factories, employees working on production lines have to manually pick up components.

The facility in Viet Nam is also Daikin’s first factory to use IoT (Internet of Things) technology in production systems. Other factories around the world are just starting to use this technology.

In addition to using sensors, Daikin Vietnam uses many other technologies such as FDI technology (a single approach to device integration) and cameras from which the company can obtain inspection data and production data.

Based on the data in the IoT system, the company’s data managers can determine which additional devices should be installed on production lines and which machines are needed to help obtain data.

Citing other examples of increased Japanese investment in Viet Nam, Shinji said: “Sumitomo Corporation is working on doing the same in Ha Noi, with plans to introduce 5G as well as face-recognition systems and blockchain technologies.”

In addition, Japanese company Sharp has announced a plan to invest in Binh Duong Province to produce air cleaners, displays, and other electronic devices, according to Shinji.

And, automaker Toyota has opened a new dealership in An Giang Province, based on the belief that residents in provinces like An Giang can afford the cars.

According to JETRO, as of April last year, about 2,000 companies had registered with the Japanese Chamber of Commerce. In 2018, the manufacturing sector made up 25 per cent of Japanese investment, making it the largest sector.

HCM City has attracted the largest number of investment projects with 1,247, making up more than one-third of the total, and Ha Noi is second with 1,081.

But in terms of money invested, Thanh Hoa Province has attracted the largest amount, with Nghi Son Refinery ($9 billion), the largest project in the country. The province is followed by Ha Noi, Binh Duong Province, Hai Phong, and HCM City.

“I’m sure that the number of Japanese companies coming to Viet Nam will increase, especially across sectors such as consulting, IT, retail, and distribution,” Shinji said. “I don’t expect any rapid or big changes from 2018 to 2020. But I think the manufacturing sector is strong, with relatively high levels of investment.”