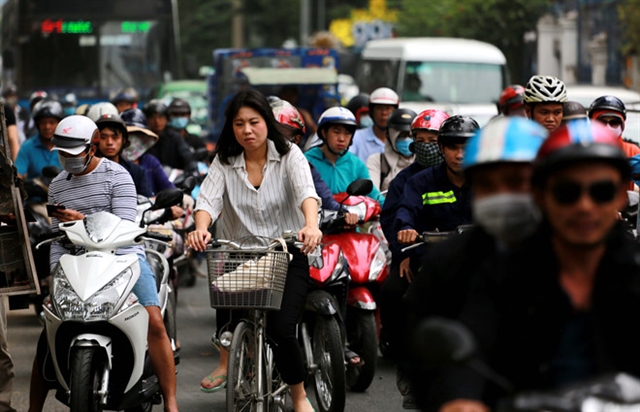 HCM CITY — The HCM City Department of Transport has sought approval from the People’s Committee for a public bicycle rental service.

According to Trí Nam Technology Development Investment JSC, the company that will run the project, dubbed Mobike, it will offer 800-1,000 bicycles at 70-80 public places in District 1 in the first phase this year.

People can hire the bikes through its mobile application or website, pay via QR code and use an e-card to unlock the vehicles.

In the next phases, the company will offer daily, weekly and monthly tickets.

A Trí Nam spokesperson told Thanh Niên (Young People) newspaper that each parking lot would have 10 to 20 bicycles, and they would be situated on some central streets in District 1 near bus stops.

The city also plans to earmark a separate lane each for buses and bicycles in District 1, he added.

This is not the first time the city is encouraging people to use bicycles to prevent congestion and protect the environment.

In 2007, the department announced to pilot a public bicycle service in the city centre and also bought a number of bicycles to encourage its staff to ride to work.

But the project stalled for long due to lack of adequate infrastructure in the city.

Đoàn Hồng Đức, a lecturer at the city’s University of Transport, said if the city focuses on developing infrastructure for bicycles, they would become an important link in the traffic system and complete the public transportation system.

It has become impossible to bicycle in the city amid the huge numbers of motorbikes and cars now, he said.

Besides, the sidewalks on many streets are degraded and illegally encroached upon, making it difficult for the authorities to implement the bicycle project, he said.

They need breakthrough solutions such as demarcating separate lanes for bicycles or cracking down on illegal road encroachment, he added. — VNS