You are here: Home / Hà Nội to have enough pork during Tet: officials 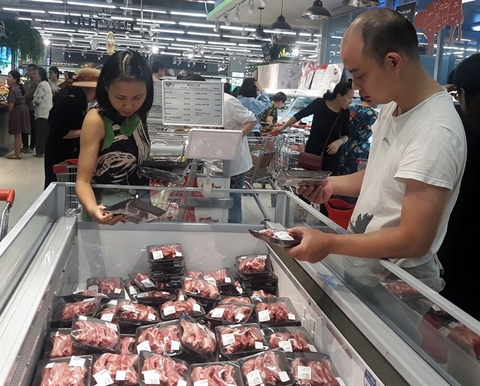 Customers watch pork at Vinmart supermarket in Ha Noi. According to pork sellers, although the price of pork has decreased slightly, the consumption has not increased. — VNA/VNS Photo Do Phuong Anh

Ha Noi will not have to face a shortage of pork during the Tet (Lunar New Year) holiday, an official of the capital city’s Industry and Trade Department has said.

A nationwide shortage has held for about 10 months due to the impact of African swine fever.

Tran Thi Phuong Lan, the department’s deputy director, said Hanoians’ demand for pork will be met because suppliers from neighbouring provinces and cities have committed to providing the city with an estimated volume of 43,000 tonnes of pork during the holiday.

The capital city’s demand for pork is predicted at about 22,300 tonnes during the holiday.

Meanwhile, in many supermarkets, the price of pork has been cooling down. At Co.op mart supermarket chain in Ha Noi, the pork price of CP Joint Stock Company decreased by VND5,000-10,000 per kilo compared with a week ago.

According to pork sellers, although the price of pork has decreased slightly, consumption has not increased.

Nguyen Thi Na, a worker at Cau Dien industrial park, who shops at Cau Dien market in Nam Tu Liem District, said the price of pork ranges from VND130,000-150,000 per kilo at this market, which is so high that she only buys once or twice per week.

As for pork imports, Lan said the Government has directed businesses nationwide, including those from Ha Noi, to import about 100,000 tonnes of pork in the first quarter of this year

She said the city is willing to work with importers if it lacks domestic supply.

“We have not yet considered the possibility of importing pork because the domestic supply will meet the city’s demand during the holiday,” Lan said.

The city’s businesses have reserved goods, including pork, to stabilise the market, avoiding importing products before Tet at expensive prices. Notably, businesses who take part in the city’s market stabilisation programme have committed to keeping pork prices 5 per cent lower than the market price. — VNS