You are here: Home / Friendship and cooperation – main theme of Việt Nam-China relations 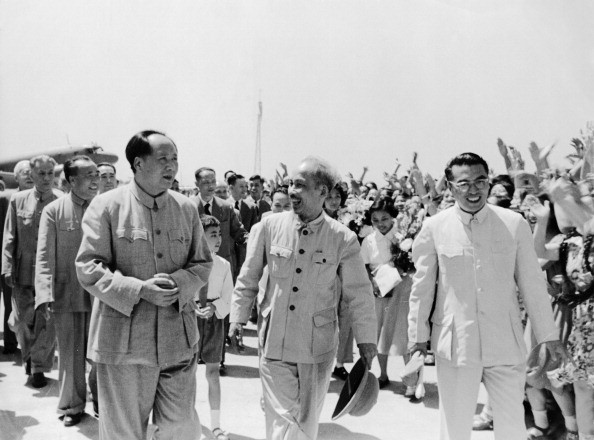 The Democratic Republic of Việt Nam’s President Hồ Chí Minh (centre) was welcomed at the airport by Chinese Chairman Mao Zedong (left) upon his arrival in Peking (Beijing) on June 25, 1955. — VNA/VNS File Photo

HÀ NỘI — Friendship and co-operation had been the main theme of Việt Nam-China relations over the past seven decades, Deputy Prime Minister and Foreign Minister Phạm Bình Minh said in an article to mark the 70th anniversary of Việt Nam-China diplomatic ties.

Minh, who is also head of the sub-committee on the Việt Nam-China Steering Committee for Bilateral Co-operation, said 2020 was an important moment for the two countries as they celebrate the 70th anniversary of diplomatic ties and looked back at the neighbourly friendship built and nurtured by late Presidents Hồ Chí Minh and Mao Zedong along with their revolutionary predecessors.

According to the Deputy PM, January 18, 1950 was an important milestone in Việt Nam-China relations. Not long after its establishment, the People’s Republic of China became the first country in the world to set up diplomatic ties with the Democratic Republic of Việt Nam (now the Socialist Republic of Việt Nam).

During 70 years of development, the Parties, States and peoples of the two countries had stood side by side and given each other valuable support and assistance, contributing to the success of their respective revolutionary causes of national liberation and socialist building.

Over the past seven decades, relations between Việt Nam and China had experienced ups and downs, but the friendship and cooperation remained the main theme, Minh wrote, adding that the amity built and nurtured by late Presidents Hồ Chí Minh and Mao Zedong and generations of leaders had become a valuable asset that helped maintain the stable development of bilateral traditional ties and benefited both peoples.

Since the normalisation of relations in 1991, Việt Nam and China had deepened their rapport in all fields, from politics and economy to culture, security and defence. High-level exchanges and meetings between the two Parties and States had been regularly maintained in diverse forms. The two countries’ leaders had reached many important common perceptions, which contributed to the reinforcement and enhancement of political trust and comprehensive co-operation in all arenas, as well as serving as the long-term strategic direction for the healthy and stable development of bilateral relations, Minh said.

He added that the two sides had agreed to develop bilateral relations under the motto “friendly neighbourliness, comprehensive co-operation, long-term stability, and looking forward to the future” (set in 1999) and in the spirit of “good neighbours, good friends, good comrades, and good partners” (set in 2005).

In 2008, Việt Nam and China entered into a comprehensive strategic co-operative partnership. This is the highest level of co-operation framework in Việt Nam’s relations with countries around the world, and China was also the first country to build this framework with Việt Nam.

With joint efforts, the bilateral comprehensive strategic co-operative partnership had witnessed stable development and achieved fresh progress over the years.

Việt Nam and China had set up nearly 60 mechanisms of exchange and co-operation from central to local levels in most fields, Minh wrote.

The two Parties’ co-operation had been strengthened, contributing to building trust between their countries. They had maintained regular delegation exchanges in personnel training and Party building; organised high-level meetings and theoretical workshops for experience sharing in Party building, State management, reforms and international integration; and signed and effectively implemented co-operation agreements.

Việt Nam’s National Assembly and China’s National People’s Congress, the Việt Nam’s Fatherland Front and the Chinese People’s Political Consultative Conference, and ministries and sectors had constantly expanded their exchange and co-operation. To date, Việt Nam and China had successfully held 11 meetings of the Steering Committee for Bilateral Co-operation, along with other activities such as border defence friendship exchanges, strategic security dialogues and defence strategy dialogues. The two nations had continued mutual visits by naval ships, conducted joint patrols on land and in the Gulf of Tonkin with joint fisheries inspections, and held exchanges for young officers.

The two sides had also seen dynamic co-operation among their localities, which had produced practical benefits for all. Nearly 50 Vietnamese cities and provinces had set up friendly ties with those in China with exchange events held frequently. The most notable events included spring meetings of Party Secretaries of four Vietnamese provinces – Quảng Ninh, Lạng Sơn, Cao Bằng, and Hà Giang – and China’s Guangxi, as well as of the joint working committee of those five localities. There were also conferences to review co-operation between Vietnamese ministries, sectors and localities and China’s Guangdong; a joint working group between Việt Nam’s Hà Giang, Lào Cai, Lai Châu, Điện Biên and China’s Yunnan; and economic corridor co-operation between Việt Nam’s Hà Nội, Lào Cai, Hải Phòng and Quảng Ninh and China’s Yunnan.

During their meetings, the two sides discussed ways to enhance mutual understanding and trust, bolster substantive ties in all areas, remove barriers and together build a border of peace, friendship and stability, which played a vital role in developing the Việt Nam-China comprehensive strategic partnership in a stable and healthy manner.

Exchanges between mass organisations had been expanded to strengthen trust and mutual cooperation and created a solid basis for bilateral relations. The two countries had jointly organised many cultural events, for example a people’s forum, people’s friendship festival, border people’s festival and youth friendship meeting.

Bilateral ties in economics, trade, investment, science-technology, culture, education and tourism had also seen significant progress. In November 2017, Việt Nam and China signed a memorandum of understanding on promoting connectivity between the “Two Corridors, One Belt” initiative and the “Belt and Road Initiative”. Since 2004, China had remained Việt Nam’s largest trade partner. Today, China was Việt Nam’s biggest import market and second largest export market, while Việt Nam was China’s biggest trade partner in ASEAN and the 8th largest trade partner in the world. Two-way trade hit US$106.7 billion in 2018, 3,300 times higher in 1991. In the first 11 months of last year, bilateral trade totalled $105.75 billion, a year-on-year increase of 8.71 per cent. As of the end of last November, China was the seventh biggest foreign investor in Việt Nam with 2,739 FDI projects worth $16.1 billion in total. China had provided Việt Nam with long-term soft credit packages and non-refundable financial aid to support the latter’s socio-economic development. About five million Chinese tourists visited Việt Nam annually.

Currently, there were 11,000 Vietnamese students studying at Chinese universities while some 2,000 Chinese nationals were studying in Việt Nam.

Under agreements and common perceptions reached by the two countries’ leaders, outstanding problems in bilateral ties had been solved step by step. The two countries had signed a wide range of important documents that created a prerequisite to build a Việt Nam-China border of peace, stability and development, contributing to enhancing traditional relations as well as co-operation between the two sides. The agreements include the Land Border Treaty (signed in 1999), the agreements on maritime boundary delimitation and on fisheries co-operation in the Gulf of Tonkin (2000), and three documents on land border management (2009).

At present, disagreements and different perceptions remained between the two countries on the sea issue. High-ranking leaders of the two Parties and countries had reached many important common perceptions on controlling disputes and maintaining peace and stability in the East Sea. The two sides signed an agreement on the basic principles guiding the settlement of sea-related issues in 2011 while establishing and maintaining a governmental-level negotiation mechanism on border and territory. Meetings between deputy foreign ministers and three negotiation mechanisms of expert working groups had been held regarding the area off the mouth of the Tonkin Gulf, co-operation in less sensitive sea-related areas, and co-operation for common development at sea.

Valuable experience during the negotiations on the land border and delimitation of the Tonkin Gulf, together with the agreement on basic principles guiding the settlement of sea-related issues and common perception between leaders, created a prerequisite and trust for the two sides to continue talking to seek measures to settle the East Sea issue. This would follow a peaceful manner on the basis of the two countries’ long-lasting friendship, respect for legitimate rights and interests of each other, and in accordance with international law, particularly the UN Convention of the Law of the Sea 1982 (UNCLOS 1982) and the Declaration on the Conduct of Parties in the East Sea (DOC) between ASEAN and China.

In conclusion, Deputy PM and FM Minh affirmed that the achievements made in Việt Nam-China relations in the past seven decades were valuable assets for both peoples. This year, the two countries would join hands to organise a multitude of celebrations, which Minh said were expected to create a new driving force for bilateral relations.

He expressed his hope that 2020 would mark a new period of development of relations between the two Parties, States and peoples. — VNS