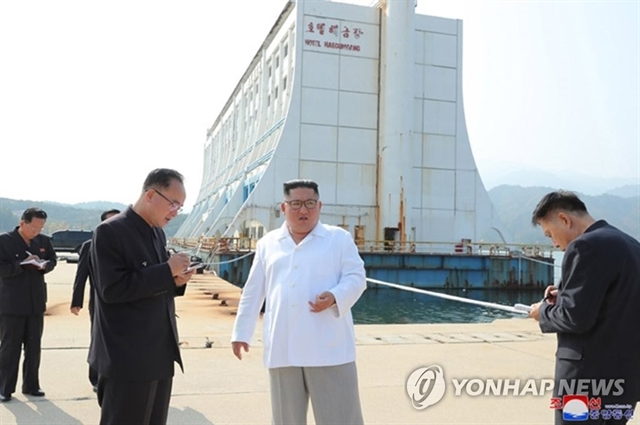 North Korean leader Kim Jong-un (centre) inspects the Mount Kumgang resort on the east coast in this photo provided by the Korean Central News Agency on Oct.ober 23. Kim ordered the removal of all South Korea-built facilities at the once jointly run tourist spot, according to KCNA. — YONHAP/VNA Photo

SEOUL — North Korea sent an ultimatum to South Korea earlier this week that it will unilaterally remove the South-built facilities from its Mount Kumgang resort unless Seoul tears them down on its own, Pyongyang’s official news agency reported on Friday.

The North’s tough stance suggests little room for inter-Korean negotiations that South Korea has sought in an effort to keep the long-suspended tour project that was considered one of the most tangible symbols of inter-Korean reconciliation and co-operation.

“On November 11, we sent an ultimatum, warning that if the South Korean authorities persist in their useless assertion, we will take it as an abandonment of the withdrawal, and take resolute measure for unilaterally pulling down the facilities.” the Korean Central News Agency (KCNA) said in an English article.

“We will develop Mount Kumgang to be the world renowned tourist resort with responsibility and in our own way as its owner for the sake of the nation and posterity,” KCNA said. “There is no room for South Korea to find its place there.”

KCNA said South Korea has stayed mum on the ultimatum.

Acknowledging that it has received the ultimatum, South Korea’s unification ministry handling inter-Korean affairs urged Pyongyang to come out for talks to resolve the issue.

“The government will handle this in a calm manner based on our consistent position that the issue of Mount Kumgang tourism should be dealt with through mutual agreement between the South and the North,” Kim Eun-han, the ministry’s deputy spokesperson, told a regular press briefing.

“We urge the North to respond positively to our position,” he said.

Last month, North Korea demanded South Korea come and remove its resort facilities at Mount Kumgang on the North’s scenic east coast, saying that it will build its own international tourist zone there.

South Korea has called for face-to-face talks to discuss the fate of the tour project to the mountain and proposed sending a delegation to check the facilities, but the North has rejected the offers, saying that the issue can be discussed in writing.

Launched in 1998, the tour program was regarded as a key symbol of inter-Korean reconciliation and economic co-operation. About 2 million tourists visited the mountain until it was suspended in 2008 when a South Korean tourist was shot to death by a North Korean solider.

South Korean President Moon Jae-in and North Korean leader Kim Jong-un agreed in September last year to normalise the tour program when conditions are met, but little progress has been made ever since due to global sanctions against the North.

Last month, Kim toured the mountain and ordered the removal of all “unpleasant-looking” South Korean facilities through an inter-Korean agreement and the construction of the North’s own international tourist zone there. The order was seen as expression of his frustration over the protracted suspension of the joint tour program and intention to end it.

South Korea has said that it will consider “creative solutions” to the Mount Kumgang issue, saying that the mountain has served as not just a tourist destination but also as a venue for major non-political cross-border events such as the reunions of families separated by the 1950-53 Korean War.

South Korea has also hinted at allowing individual trips to Mount Kumgang if progress is made in talks with North Korea in guaranteeing the safety of its citizens.

KCNA denounced South Korea for belatedly seeking creative solutions and negotiations to address the fate of the tour project after wasting the past 10 years minding the United States. It said that North Korea is adamant in its plan to destroy the facilities and build its own in their stead.

“The South Korean authorities left the facilities for the tour of Mount Kumgang untouched for over a decade in fear of the US. Only after they are pressed with the withdrawal of those facilities, they are dismayed, begging us to let them stay even at a corner of the mountain and take part in the resumption of the tour,” KCNA said. “How can they be called, pitiful or shameful?”

“Provided that the timetable is set, we cannot while away time, only exchanging messages,” it added.

Hong Min, a research fellow at the Korea Institute for National Unification, said that the North’s ultimatum appears to show that Pyongyang is serious about removing the South-built facilities and pushing for its own development.

“The North seems to be going ahead with its already determined schedule and signaling that it will push to change a pattern or paradigm in inter-Korean relations going forward,” he said. “It could be construed as the North’s intention to toughen its policy toward the South next year.”

North Korea has accused South Korea of dragging its feet in inter-Korean affairs on worries that active cross-border co-operation could anger the US in pursuit of keeping strong sanctions in place until denuclearisation talks produce intended outcomes.

Hong said that the North appears to be expressing its discontent with the South Korean government’s continued reluctance to take the lead in inter-Korean relations.

“The ultimatum might be intended to target Unification Minister Kim Yeon-chul’s planned visit to Washington next week as he is expected to discuss the Mount Kumgang issue with US officials,” he said.

The minister plans to leave for the US on Sunday on a seven-day trip to attend a forum. On the sidelines of the event, he is expected to meet US officials to discuss the fate of the Mount Kumgang tour project, though scheduling details have yet to be confirmed.

In the face of little chance of global sanctions being eased or lifted given stalemated nuclear talks with the US, North Korea has sought to develop its tourism industry as part of its self-reliance efforts.

Last week, the Choson Sinbo, the newspaper based in Japan, said that North Korean leader Kim’s tour of Mount Kumgang reflects his determination to break through international sanctions through self-reliance.

Earlier in the day, the North’s state media reported that Kim visited a spa resort being built in central North Korea, the second such “field guidance” in less than three weeks in the region, ordering perfect construction of the facilities there. — YONHAP